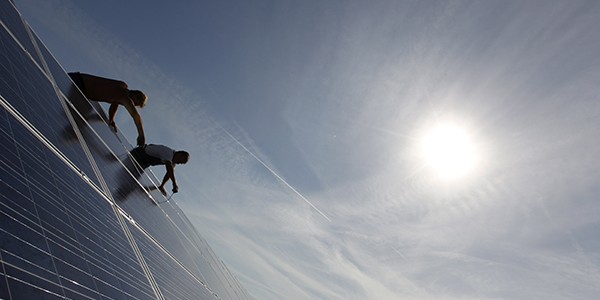 How to stay cool during a heat wave? New research offers one unexpected solution: cover your roof with solar panels.

There are plenty of benefits to using solar panels—notably clean energy, long-term electric-bill savings, utility rebates, and tax incentives. But one recently discovered side effect might be especially attractive to people suffering through this weekend’s heat wave: Solar panels also keep buildings cool.

A new study in the current issue of the journal Solar Energy has found that a building’s ceiling was cooler by 5 degrees F under a roof lined with solar panels than under a standard roof, as the panels reduced the amount of heat reaching the roof by 38 percent.

“It’s mostly that shadow effect, like when you park your car under a tree. The sun hits the solar panels, not your roof,” explains study co-author Jan Kleissl, an assistant professor of environmental engineering at the University of California – San Diego. “It’s very intuitive.”

Kleissl, fellow UCSD researcher Anthony Dominguez, and NASA’s Jeffrey C. Luvall used thermal infrared imagery to measure the temperature of the Powell Structural Systems Laboratory, which is partially covered by solar photovoltaic (PV) panels. The details of the study are of course specific to this particular building, which Kleissl describes as an “old, empty cube”—a commercial-style building that is more than a decade old and has little insulation.

“The AC energy savings potential of roof-mounted PV panels is highly dependent on building characteristics,” notes David Sailor, the director of the Green Building Research Laboratory at Portland State University. “For this class of buildings, the savings may be large.”

The researchers estimate that energy saved as a result of cooler roofs could, over the life of a solar-panel roof system, account for as much as 5 percent of the panels’ initial cost. This computation could even be a conservative one. The researchers’ data also suggest that, during winter months when energy use peaks in colder climates, savings may be even greater—since solar panels, it seems, can insulate a building as well.

“It’s like having a blanket,” Kleissl says. “In winter, the solar panels won’t allow all the heat to be lost to the atmosphere.”

For the rest of these super-hot summer days, though, Kleissl’s group will be concentrating on generalizing their findings and developing a calculator that people could use to predict the cooling effect of solar panels on their own roofs. “It’s about showing that solar has a lot of benefits and that they’re quantifiable,” he says.